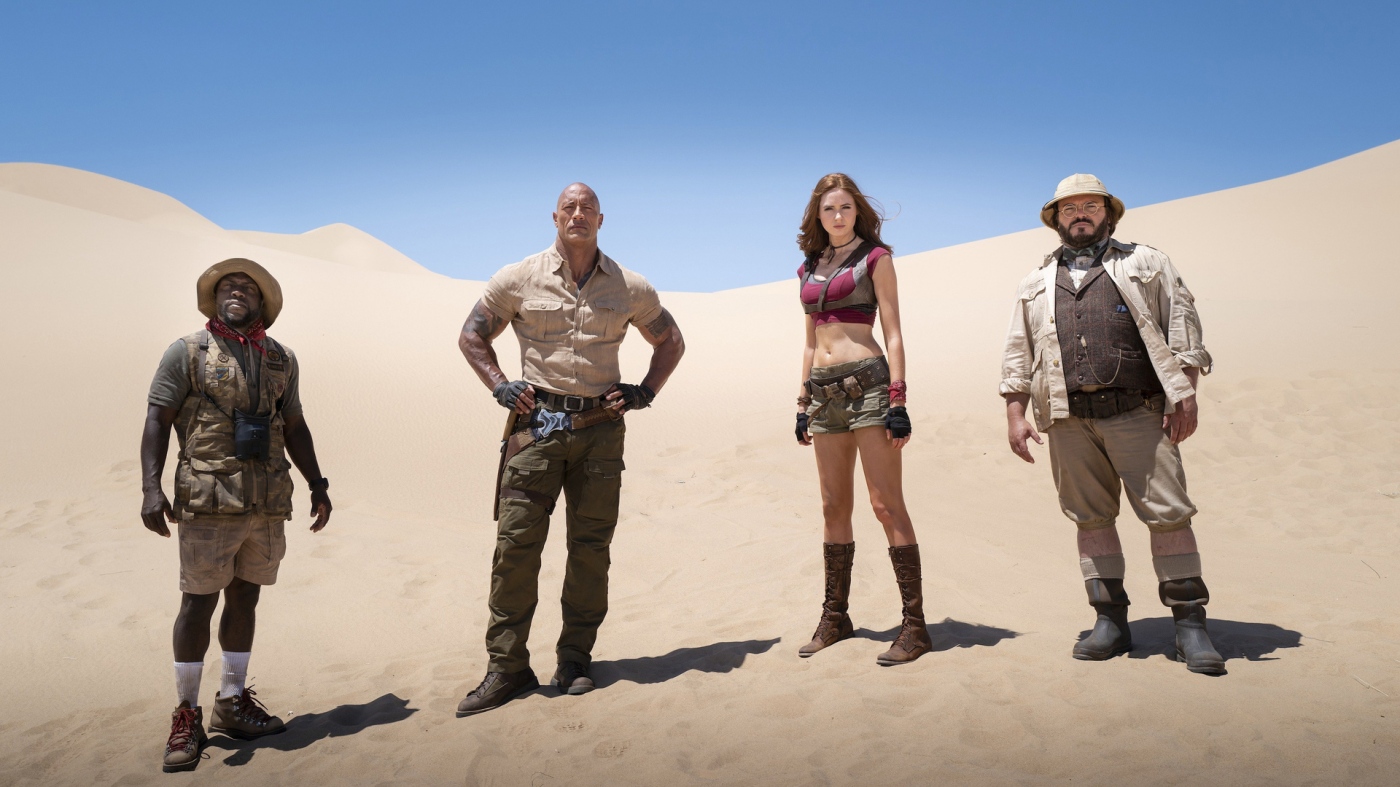 When Spencer Gilpin (Alex Wolff) goes back into the fantastical world of Jumanji, his pals Martha Kaply (Morgan Turner), Anthony “Fridge” Johnson (Ser’Darius Blain) and Bethany Walker (Madison Iseman) re-enter the game to bring him home. But the game is now broken — and fighting back. Everything the friends know about Jumanji is about to change, as they soon discover there’s more obstacles and more danger to overcome.

It may be hard to believe, but I actually saw the critically acclaimed and highly beloved Jumanji: Welcome to the Jungle just this past week. When it was released in the theatres, it managed to gross a whopping $962.1 million at the worldwide box office. On a budget of $90-150 million, the box office profit on that film was incredible. But I only saw it recently, because at the time, so many other movies had come out that my time was occupied with.

But, I saw it eventually, and I genuinely really liked it. A lot. I was honestly not expecting too much out of it. The whole style of these Jumanji films seemed just too weird and campy and I was not expecting Jake Kasdan to craft an exciting, adventure filled film with a ton of heart, but that is exactly what it was surprisingly.

To be completely honest with you, I was unsure about how I felt regarding a sequel to that movie. Welcome to the Jungle was a blast at the movies, but a lot of the things that were shown in The Next Level turned me off a little bit. The whole idea of swapping out the characters and having these new additions to the cast play the old avatars from the first film seemed like such a bizarre choice. Why would you not just continue having Spencer and friends play the same avatars they played in the first outing?

But, to my surprise, The Next Level handles this pretty well, and although at times it can be a bit confusing as to who is who, it still worked and definitely made for some greatly comedic moments.

Much like the aforementioned installment, this new chapter in the series is absolutely hilarious at times. Each and every one of the cast members bring their comedic A game to their roles and I would say that nearly all of the jokes landed. One of the funniest actors in this one was definitely Dwayne Johnson as well as Karen Gillan, which was a delightful surprise.

Before, Gillan’s character Ruby Roundhouse did have a few funny moments, but she did not get enough time to show her comedic skill. Here, however, it is the exact opposite. In fact, there is one scene in the second act with her and Jack Black that was really funny and is one of the film’s funniest and most memorable sequences.

Speaking of Ruby Roundhouse, she is one of the most entertaining characters to watch on screen. She is almost always doing something crazy, wild, and adventurous and Gillan’s chemistry with the rest of the cast is truly amazing.

As this is a Jumanji movie, most audiences are going to want to see a ton of chaos ensue in this crazy video game world, and I can gladly report that we do get a whole bunch of it. Although I do overall enjoy the predecessor more, the action here is better and a lot of it was in camera and extremely fun to watch, albeit effects heavy.

Something that I found was incredibly clever about Welcome to the Jungle was how each character had only three lives before they were dead, and so the film had its tension and stakes instantly raised. The same can be said about The Next Level too for the most part. Even though the stakes do not necessarily feel as high as they did before, I still did feel a little bit anxious towards whether or not certain characters would make it out alive in some situations.

Also, the villain here, Jurgen the Brutal (Rory McCann) is ridiculously weak. Much like the previous outing, the villain is the definition of a cliché villain. The type that you would expect to stroke their mustache and laugh evilly. There is literally no character development given to him and it would have been so much better if the film had given us some backstory behind his character.

At times the editing can be a bit jarring too, as some sequences have us in a zany video game world and then the next second, we cut back to some characters in the real world, and the transition there was not smooth and felt bumpy.

But overall, this is yet again a surprisingly good movie that a ton of families and audiences will have a blast watching. If they do want to make a third entry down the road, I am sure that I would be perfectly okay with that. As long as Kasdan is returning, as well as the cast that we know and love, then it should hopefully be a great time, because this one sure was.

Jumanji: The Next Level is yet another wacky and greatly funny movie with a big heart and boasts tons of fun action and adventure.